You cannot be SERIOUS!!!

The Washington Kastles have welcomed tennis’ brightest stars all season long and Tuesday night was no exception as the legendary John McEnroe now of the World Team Tennis’ NY Sportimes, was in town for the evening’s volley . 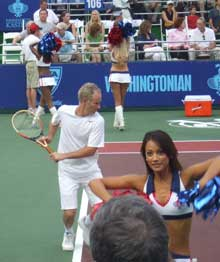 At almost 52, McEnroe still looks almost boyish, both on and off the court.

In a pre-game press conference, the still curmudgeonly tennis pro addressed everything from his feeling on the long season stating that this causes more injuries, shorter careers, etc., to last season’s now infamous faceoff with Leander Paes which resulted in a (highly uncivilized in the realm of tennis) ‘bench clearing brawl’ involving players, the chair ump and fans. This year’s meeting of the two teams was a lot more subdued if not a little more humid. Although the game was interrupted by rain showers, The Kastles went on to beat the Sportimes 22-16 in this crucial Eastern Conference battle.