You might be fooled by American University Professor Pallavi Kumar's broad smile, friendly tone, and easy conversationality -- but be warned. Writers, would-be journalists, bloggers and spin-meisters have a new weapon. The diminutive Kumar, Georgetown resident, is training the bloggers, journo-lists, PR execs, and media producers of tomorrow to cut through the noise of the blogosphere -- no matter what.

"I'm a news junkie," she says innocently. That's not the statement it used to be. Nowadays, it means a honed and bottomless appetite for everything from wsjonline to People, Us Weekly, Facebook, Twitter, RadarOnline and ratemyprofessors.com. All in seconds, in rapid fire 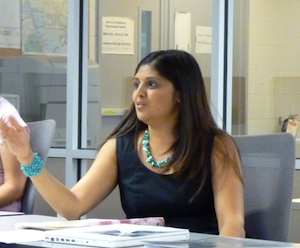 digitally. Everything under the LED (not the sun), 24/7 at warp speed.

Ben and Sally, call your office. No, text.

Kumar is training her students to infiltrate and outmaneuver all the usual hierarchies. A recent graduate class focusing on public relations and social media featured Project Beltway founder Rachel Cothran, whose blog caught the attention of Washingtonian and others before she turned her attention to the worthy Corcoran Gallery of Art.

Pallavi Damani Kumar joined AU's Public Communication division in 2009 after rising through the ranks at Fleishman Hillard to become vice president in social marketing, including a stint with the White House Office of National Drug Control Policy’s National Youth Anti-Drug Media Campaign. Kumar was an associate director of international public relations at Wyeth Pharmaceuticals, where she led global public relations activities for several products. As a vice president of Ketchum's healthcare practice, Kumar cut her teeth on the most controversial issues of the day.

Knowing her history, it's easy to see why Kumar isn't intimidated by the turbulent and sometimes treacherous blogosphere. She and her husband Nitin Kumar, a radiologist, and children, Rani, age six, and Riya, five months, have nestled into peaceful Hillandale, but Pallavi was born in Pune, India, to a family with roots in Uganda. They fled the East African country in 1972 when dictator-President Idi Amin gave Uganda's Asian population, mostly Gujaratis of India, 90 days to leave the country, following an alleged dream in which, he claimed, God told him to expel them.

With that behind her, Pallavi has little fear -- even of the internet.