A Walk with Hugh

I fell in love with his Tuscan Villa on Q Street many years ago and have been a fan ever since. An afternoon with Hugh Newell Jacobsen was more than a special visit with an internationally celebrated architect and Washington’s premier modernist, it was a guided tour of some of my favorite buildings -- 127 Georgetown houses have the Jacobsen touch. He is not only deservedly world renowned, he is our East Village neighbor. Our conversation revealed that we had been admiring the same Christmas congregation of chubby robins on a treetop visible from our respective office windows.The Tour On a crisp Wednesday afternoon, we bundled up to go after a quick stop to his P Street office, where a touching portrait of Robert Lautman hangs. Hugh’s beloved friend and personal photographer of 50 years died in October. At the end of the block Hugh pointed out his first office above the dry cleaners, currently home to Washington Fine Properties. Up the street was Hugh’s first residence, and around the corner on 27th, the Trentman House. Recognized as Georgetown’s first modern house, it is also the first one Hugh “built from scratch.” It had been a dilapidated late-19th Century, two-story wood-frame house before it was condemned. Lucky for us, even 125 protesting signatures failed to stop the demolition in 1968. As Hugh describes, it “sits quietly and shuts up” among 1900 workers’ homes and 1950’s “Coca Cola Colonials.” 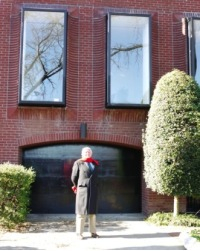 To achieve harmony of scale for a thoroughly modern structure in a newly designated historic district, horizontal lines were drawn from the neighboring houses across the space of the new house to align cornices, lintels and sills. It was the first and last time he used those exquisite curved bricks that took forever to be made. The entire house was decorated before the last brick was laid. Inside, two 10-feet-wide, 42-feet-tall cylinders fashioned from sewer pipes contain the winding stairs. Skylights flood the interior with sunlight. The second floor opens onto a rear garden, and the bay window in front juts out far enough to offer a view of the tennis courts and Rose Park across the street rather than the sidewalk below. Current owners are responsible for organizing the lovely landscaping in and around the park that now enhance the view. On the way to the Jacobsen residence, we passed a former mom & pop shop at the corner of 27th & O that once advertised fryers at 25 cents a pound on its side wall. Imagine trying that now. True to his claim that “secrets of entry are big in my work,” we entered Jacobsen’s home though the side gate of an ivy-covered garden to the left of the original front door. The interior has changed very little from the photos I’ve seen published over the years. All the Jacobsen signatures were there: white Anne Truitt painting, white walls, white sofa, egg crate bookcases, Hartman lamps, glass tables, ceiling-to-floor windows, and of course, no baseboards or moldings. Hugh’s dad once said, “If Bridget Bardot was sitting naked at the end of the sofa, you couldn’t find her.” 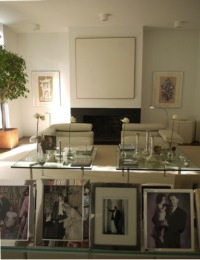 It was also dad who thought his math-challenged portrait painter son who had recently graduated from the University of Maryland with a Fine Arts degree needed a more traditional career path. Armed with only his portfolio, the “well-mannered Southerner who seemed to have some talent,” was admitted to Yale’s School of Architecture. After graduation, and since 1958, Hugh Jacobsen has called Georgetown home. Had he ever considered living anywhere else, I asked him. No, “I never even considered moving to the other side of Wisconsin Avenue,” he grinned. “For a minimalist, I have a lot of stuff,” Hugh laughed as he showed me some of his prize possessions. That yellow Josef Albers he coveted but couldn’t afford at the time was purchased from the artist for $10, with the promise to pay something every month. He did. It took three years. The fabulous model of the Hotel De Crillon on the Place de la Concorde is such an exact replica it was used to film action close-up scenes of Paris. In a library filled with 4,000 books (top row, all Agatha Christie) sits a replica of the U.S. Capitol, complete with Jacobsen’s West Terrace courtyard addition! We stepped out onto Hugh’s stone terrace framed by a bank of English ivy and 15 individually lit columnar American Holly trees planted in matching rows. As we exited though the rear gate, he told me he’d always wanted to have a dinner party between the trees in his formal French garden. On our way to my place for a little wine and lunch, Hugh pointed to a white house across the street where his middle son Simon and his family live. Simon is now Hugh’s full architectural partner and very talented, according to his proud father. Before following in his father’s footsteps, Simon was a punk rock musician in a group called “State of Alert.” Join me for the continuation of A Walk with Hugh, for lunch, if you will. For more on Hugh Jacobsen’s work, visit the award-winning website designed by Simon Jacobsen, his son and partner: www.hughjacobsen.com