During the Dutch Golden Age of the 17th century, prices for tulip bulbs reached extraordinarily high levels and then suddenly collapsed. At the peak of “Tulipomania”, in February 1637, some single tulip bulbs sold for more than 10 times the annual income of a skilled craftsman.

Newly introduced from the Ottoman Empire, the flowers, especially the showy two-color varieties, rapidly became a status symbol. As the demand grew, the prices climbed, and people of all stations, even servants began to buy and sell tulips for profit. . 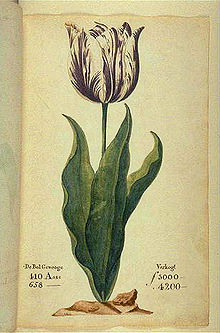 At one point 12 acres of land were offered for a Semper Augustus bulb. A single bulb was selling for the equivalent of $50,000 in today’s economy.

Remember, it was the enterprising Dutch who brought us Wall Street and developed many of the techniques of modern finance. By 1636 tulips were being traded on the exchanges. The demand was such that they began to sell futures on the bulbs, which were only in bloom in April and May for about a week.

But, as we have learned in our own times, at some point, high prices caused by inflation can destroy the demand, and the market can collapse.