Hollywood’s Oscar fever hit Washington, D.C. last night at the Fitness Together party sponsored by Washington Life at Café Milano in Georgetown. Instead of political debates and press conferences, the party goers watched the classic movie "Casablanca" which was projected onto an outside brick wall. 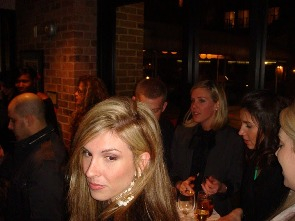 The invite-only crowd of DC’s Hollywood types came out to get in the Oscar sprit before the Academy Award show airs Sunday. Letelier Theater projected movie magic throughout the event. Guests gave donations to the American Red Cross as they arrived at the patio courtyard behind Milano; everything at the party was donated so 100% of the proceeds went to the Red Cross.

WashingtonLife’s big honchos worked the crowd, including John Arundel (with wife Christine) and Michael Clements (who was greeting guests in person and via Twitter). Party host Matt McKinnis demonstrated the latest in personal training and competed against guest David Bass in a push-up contest (McKinnis won, but Bass proved a worthy opponent.) 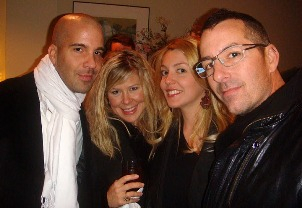 Among those moving through the packed crowd were George at the Four Season’s Benevolent Dictator Rick Raines and Celebrity Makeup Artist Carl Ray (pictured with two friends above). Also spotted in the crowd on the patio were David Vennett, Andy Baldwin, Katherine Kennedy and Todd Flournoy. 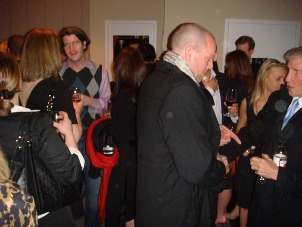 Like Hollywood awards events, guests were given "swag bags" filled with goodies, such as: Oscar-shaped commemorative chocolates from Moet & Chandon (the official sponsor of the Oscars); free workouts with a Fitness Together trainer; movie posters from Warner Bros.; bottles of Honest Tea and Muscle Milk and $25 gift certificates to Georgetown's Fresh boutique.

The Oscars air this Sunday at 8 p.m. on ABC.