Last Night I Dreamt That Somebody Loved Me ...

One of the greatest crimes against our country's many architectural achievements occurred during the Eisenhower administration of the 1950's when a determined group of transportation zealots decided to build highways through our cities.

We put them everywhere: in front of lakes, vistas, oceans,we tore down buildings, uprooted families and displaced and then drove apart neighborhoods; all in a cold war effort to modernize transportation.

Here (shown above) we visit K and 3rd Street NW in and around the turn of the century. We know this from the gas light on the corner. The same model lamp that was used throughout Washington after 1890 and can still be found in Montrose Park, Georgetown. 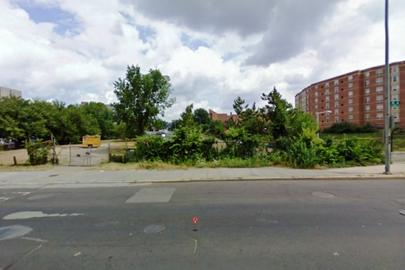 By 1971, she was dead and gone. The urban highway isn't just a concrete surface by which vehicles traverse; it is a shovel that is the brutal arbitrator that can't weigh consequences or care. With huge requirements to maintain, it offers nothing in support.

It truly is a gash in the landscape that distracts people away from beauty, while ensuring that wherever it passes through, no one stops, no one stays and no one is allowed to care.

After all, who really lives by a highway? In the American Dream no one plans to but like illness and worse, it can be thrust upon us.

This is the 3rd Street expressway, a part of Interstate 395. "The Highway: When Used As A Shovel" is a feature on The Ruined Capitol and a book in development which documents America's architectural suicide by concrete road transport.