An Evening With Lucia and Poltrona Frau

January 27th is Holocaust Memorial Day in Italy. Thanks to my friend Ezio Mattiace, (President of Poltrona Frau here in Georgetown), I had the pleasure of attending a touching tribute at the Embassy of Italy on the life of a remarkable woman.

Olivia Fincato, a young journalist/filmmaker and photographer, Renato D’Agostin met Lucia Servadio Bedarida a month before she died. “Un Giorno con Lucia” ( A Day with Lucia) is the book and “Mama Rida”, the documentary they made on the life of an Italian Jewish woman who became Italy’s youngest doctor in 1922. 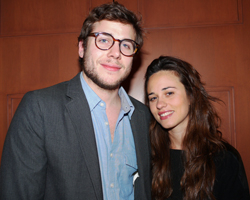 It's an incredible story. In the opening scene, Lucia is hang-gliding over Chamonix in the Italian Alps. She is 105.

But the story starts very differently. Fleeing fascist Italy in 1939, she made her way to Tangiers and found acceptance in a Muslim country to pursue her medical career. After 40 years of work as a gynecologist in Morocco, she joined her daughters in the United States. Her mother and grandmother who remained in Italy had been deported and killed. Lucia donated their last letters, written from Fossoli Camp, to the US Holocaust Memorial Museum in Washington.

Mirella and Paola, two of Lucia’s three daughters, attended the event to share memories of their beloved mother. Italian Ambassador Giulio Terzi di Sant’Agata spoke eloquently about the need to remember the more than 7,000 Italian Jews deported and killed in the Nazi camps during World War II. And Stefano Beltrame, the Embassy’s Commercial Attache, introduced a film released this week in Italy about Platform 21, the main train terminal in Milan from which Italian Jews were deported to concentration camps. The film is meant for Italy’s current and future youth who have less and less connection with Holocaust survivors as time goes on. 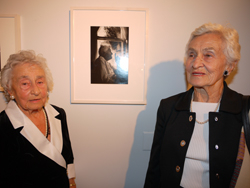 It was a moving evening made ever more comfortable by the uplifting spirit of the guests, the warm reception by Rita Venturelli, Director of the Italian Cultural Institute, and the exquisite buttery leather seating of Poltrona Frau.