Over the weekend my oldest son was lamenting the "loss" of a precious hour to Daylight Saving Time which somehow translated for him into going to school earlier or staying later or longer: he couldn't quite get his mind around it and as much as his father and I tried to explain it, he was still convinced he was getting gypped. However, when he woke up this morning at his usual time and it actually was an hour later (because of the time change), I began to reflect on the concept of "morning people" and "night people".

In our family of four we are equally divided into two camps: "early to bed, early to rise" and Night Owls. My husband and I have had many "conversations" during the course of our relationship about the circadian rhythm conundrum which broke down roughly to this: he thought I could (and should) become a morning person like him by simply waking up earlier and getting to bed earlier. I tried to explain that going to bed earlier only resulted in me lying awake for hours and still awaking exhausted. Conversely, waking up early produced a longer period of my sitting and staring sightlessly into space while a cup of coffee grew cold in my unresponsive hand. Our second son was the piece of the puzzle that finally put the debate to rest: cheerfully staying awake long past his older brother's bedtime, he played contentedly in his room and slept past the start of his pre-school day. Our two kids have such drastically different biological clocks that the "biological" aspect of it has become too obvious to argue. 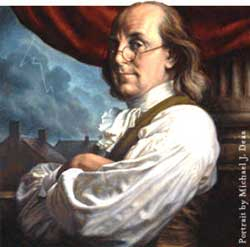 Interestingly, unlike my own family, the family I grew up with spawned nary an early bird. Mornings were quiet affairs and those who had to get to work or school did so with a maximum of effort (and a lot of tardiness) and little conversation. The evenings were the time where we caught up on each others' news, played board games and my parents stayed up all night watching old movies. In my college years, friends avoided me until after my first class and once a dorm mate apologized to me late in the day for attempting to engage me in conversation the previous morning.

In our culture, being an early riser is considered a virtue and "lay-abeds" are branded slothful and indolent. In fact, the very industrious Benjamin Franklin conceived of Daylight Saving Time in order to have more daytime hours to work. Personally I prefer the very un-American custom observed in other countries and cultures of the mid-day break or "siesta" where people escape from their work and enjoy a meal and the company of their friends and family (and maybe even a nap).

Making the most of the day is not a new concept, however, as Virgil's "Tempus Fugit" (time flees) and the famous Latin catchphrase "Carpe diem" (usually translated as "seize the day") will attest but I prefer the more gentle "Gather ye rosebuds while ye may.." as it communicates a similar message with a little less urgency. After all, there are twenty-four hours in every day, regardless of the season or location, and are any of those hours less valuable than the rest? So until I move to Alaska, Hawaii or Arizona where they don't practice DST, I plan to subscribe to my son's philosophy; "Who really wants the worm anyway?"