City Plows it Back On

You shovel it off and the City plows it back on. Kind of like an old Laurel and Hardy script, except Griffin Market owner Riccardo Bonino isn’t laughing. Thursday and Friday, he dug out his business right down to the brick sidewalk, even clearing the sidewalk intersections out to the street. He wanted cars and pedestrians to be safer.

This morning, he arrived to find new piles of snow towering over his head and sidewalks buried in tons of cement-like ice and snow. It was practically impossible to get from the street to the store.

Could this have been an unintended result of a late-breaking City snow clearing strategy? Mayor Adrian Fenty was in Georgetown Thursday demonstrating Bobcat plows in Georgetown to handle the unusual tonnage. Some critics say the city-wide strategy chose cars over pedestrians, even in Georgetown, where most people walk more than drive.

The City dumped street snow all over the cleared sidewalks in front of Griffin Market instead of in tree boxes. "There's now a mountain on each corner," he said. "It should be taken to public areas that are not used where it could melt."

Who's to blame . . . a misfiring Bobcat? An overburdened snow clearing operation? Or the unavoidable results of apocalyptic snow? 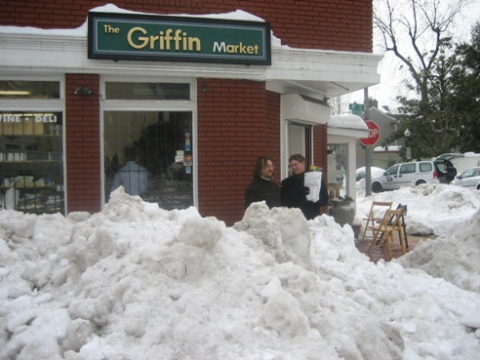 Riccardo Bonino owner of the popular neighborhood Griffin Market at 28 & P Streets, observing the mountain range of snow blocking his entrance. With him is frequent customer Larry Folk, whose wife Diane runs the nearby P St. Consignment Shop. 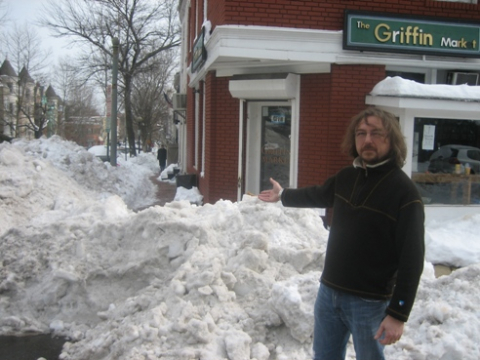 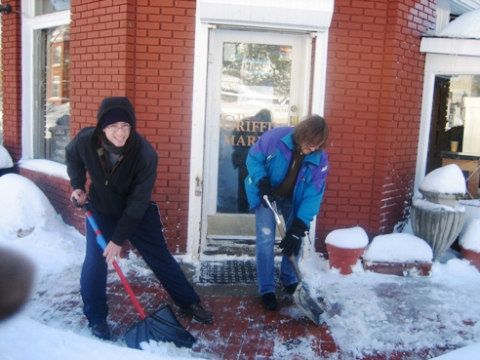